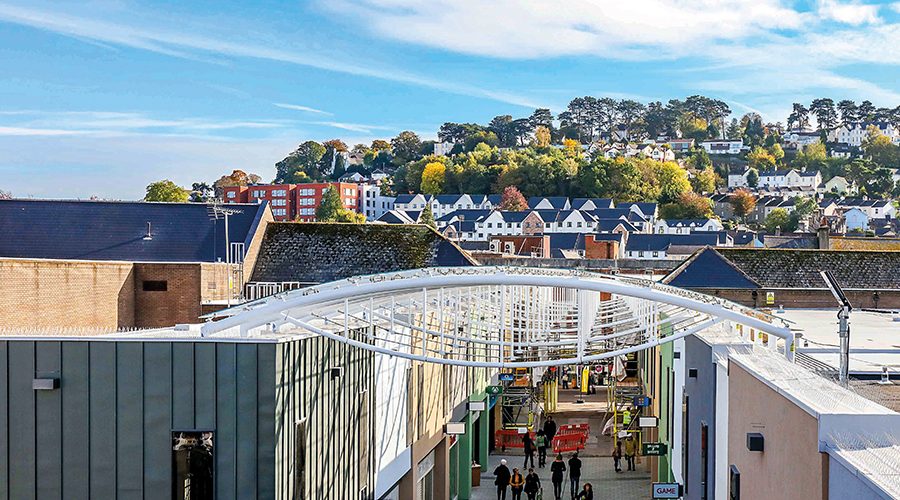 “Weather has had a greater effect on sales than economic numbers, we’ve known that forever”. So said former John Lewis Managing Director Andy Street, alluding to a longstanding challenge for British retailers – how to keep shoppers coming out on cold, wet and windy days.

At one traditional shopping centre at the heart of a Devon town, the solution is architectural – enclosing the previously open-air pedestrianised street with a large glass roof in order to create a space that can be enjoyed all year round.

Originally built in the 1970s, the Market Walk shopping centre in Newton Abbot, South Devon, was bought by Teignbridge District Council in 2016.

The £13m acquisition of Newton Abbot’s Market Walk shopping centre was the largest investment in Teignbridge‘s history and gave Teignbridge a greater ability to positively influence the future development of Newton Abbot’s central shopping district as well as regular and reliable source of income.

Teignbridge later invested £2m in upgrading the centre and modernising the appearance of the busy retail centre.

Devised by architecture firm LHC group, the project involved a comprehensive upgrade of shopfronts and paving, including re-cladding units and installing new furniture to create a more modern, welcoming street-scene. But, the defining feature is the barrel-vaulted roof, which will flood the space with light while protecting it from the elements.

A key part of delivering the architect’s vision for the scheme was constructing a roof that obstructed the view of the sky as little as possible.

This was achieved using a discreet steel structure of tension-chord-supported arched beams, holding Pilkington Planar structural glass units which are attached to the spans with the system’s stainless steel 905J fixings.

The four-point stainless steel Nexus castings allow the units to be anchored to the steel beams at the corner intersections by single bolts, minimising the hardware required and delivering a more unobstructed outlook.

The glass itself also contributes to the clarity, with Pilkington Optiwhite true low-iron glass being used to deliver a sky view with the most natural colours possible.

A total of 475m² of laminated glass was used in the project, featuring 10mm and 6mm glass sandwiching a Trosifol SentryGlas interlayer. The canopy is almost the size of two tennis courts, and from the perspective of a visitor at street level, the span of the roof recedes behind the roofs of the shops, helping to maintain the original outdoor appearance.

Shopping for all seasons

Tony Watson, interim Head of Commercial Services at Teignbridge District Council, said: “We all know that, across the country, the high street is changing rapidly, and we’re confident that the investment we have made here brings Market Walk Shopping Centre up to the standards consumers expect from a modern shopping destination.

“The weather, of course, plays a major role in many people’s shopping habits, so we believe the pleasant covered space this project has created will be attractive to people all year round, to the benefit of local residents and business alike.”

Paul Williams, Managing Director at Vitrine Systems, said: “Visiting the precinct still feels just like walking under an open sky, but with the benefit of being protected from the weather – so it’s a pleasant experience all year round.

“The new roof has also allowed the concrete rain shelters that previously sheltered the shopfronts to be removed, creating a greater sense of space and making the main boulevard feel much wider and more open.”

Jason Eggerton, UK Specifications Sales Manager at Pilkington United Kingdom Limited, said: “This project is a great example of how the Pilkington Planar system can bring a contemporary architectural appearance to an existing building without altering its original character.

“The minimal framing means the glass itself becomes the most notable feature of the installation, rather than the hardware supporting it, allowing architects to use glass to enhance the functionality of spaces without impacting excessively on their aesthetics.”