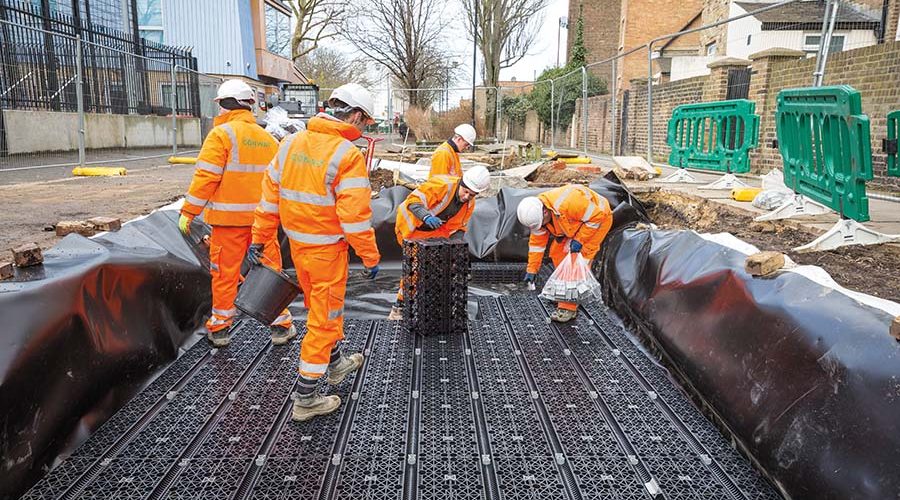 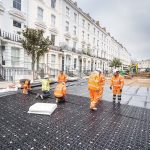 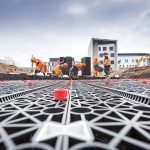 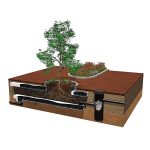 Irrespective of the diversity of opinion on the nature, causes and severity of climate change, the UK is increasingly subject to extreme rainfall events. Interestingly, annual rainfall only rarely exceeds 1500mm per annum1 – yet it is arriving in larger amounts on fewer occasions, rather than falling gradually across the year.

Simultaneously, and conversely, we are also subject to prolonged and hotter dry spells which result in shortages of water for drinking and amenity use (e.g. hosepipe bans); and stress landscapes and ‘green assets’ – trees, lawns, green roofs, planted areas etc., found in the urban environment.

Alongside this, new environmental legislation is imposing demands upon local authorities and developers regarding increasing both carbon-capture – a function of the Government’s push to carbon neutral by 2050 – and green assets in the public realm. Previously a specialist area within construction, green asset management is now increasingly seen as an essential consideration in urban design and means we need to introduce infrastructure that not only protects and nurtures these assets during dry spells but also allows for a greater intensity of ‘urban greening’ where possible.

Both these statutory drivers mean a new holistic, integrated approach to multi-functional SuDS is needed.

This new approach is what Polypipe is calling – and as reflected in its recent company name change – ‘Green Urbanisation’; and will network water collection, management and storage, and green assets to deliver: enhanced flood and drought resilience, smart water usage, increased biodiversity and greater human wellbeing. It also plays a valuable role in carbon capture and offset.

Green urbanisation is an evolution of green infrastructure – a long-established definition for green assets – and describes a transition from conventional drainage and SuDS into an extended water management network that supports multi-functional, sustainable landscapes across cities, transport infrastructure and commercial environments.

As such, future SuDS will require a redefinition of engineered and natural drainage as the boundary between the two dissolves. The opportunity is in the adoption of new technologies – such as Polypipe’s Permavoid sub-base replacement – that optimise such green assets within this broader and more adaptable water management network.

Traditionally, conventional drainage networks were simply about removing surface water as quickly as possible to a sewer, receiving watercourse or to ground. Typically, these did not truly address volume management, so early SuDS schemes, which saw the introduction of swales, retention ponds and attenuation tanks, were primarily focused on controlling run-off quantity – in essence, they increased ‘volumetric resilience’.

But SuDS have the additional benefit of, where space allows, introducing green elements into the water management process, providing the opportunity to improve public amenity, biodiversity and surface water treatment.

Their ‘green asset resilience’, however, is very limited. During prolonged dry spells, the plants are vulnerable to stress, regression and die-back, potentially resulting in the loss of all environmental, health and wellbeing benefits. Appearance-wise too, a dry, brown and barren landscape is not one that appeals to developers keen to enhance the visual quality of public spaces.

The new green urbanisation approach significantly increases both green asset and volumetric resilience by building-in captured water re-use and plant irrigation.
Sub-base replacements – such as Permavoid – allow rainwater to be captured and retained immediately below the surface. Their lightweight, high load-bearing capacities mean this can be directly under a road, trafficked podium deck surface or under a conventional green roof. This provides effective ‘source control’ – one of the key SuDS design objectives whereby rainwater is managed as close to where it falls as possible. The greater the level of source control, the more efficient, accessible and cost-effective SuDS become.

Planting, from straightforward grassed areas to fully mature trees, can be supported anywhere across an area installed with these proprietary systems. In-built passive irrigation cones wick water into the sub-soil, maintaining, protecting and containing root systems within the designated planting area.

In addition, green urbanisation unlocks the potential to re-use attenuated volumes stored elsewhere in the system – smart controls moving water around the integrated network to where it is needed.

This surface adjacent, sub-base replacement technology effectively extends the SuDS ‘envelope’, allowing green assets to be introduced across buildings and the public realm where not previously possible.

Infinitely scalable, the green urbanisation approach can be adapted to operate on a single plot or across an entire river catchment. Intelligent systems can be incorporated to automatically monitor and manage rainwater volumes in conjunction with weather forecasting data. By tracking storms, attenuated volumes across a wide area can be discharged well ahead of the event, preventing the network from being overwhelmed and reducing the flood potential.

By integrating SuDS with green assets supported by components such as Permavoid, the sector can now offer a comprehensive new generation of solutions to master planners, developers, main and sub-contractors and specifiers to help them tackle the challenging issues of extreme rainfall, flood risk and drought.

Urban greening is a fast-growing opportunity, increasing in strength and breadth in the face of fast-changing regulation, legislation and standards designed to meet demanding carbon neutrality targets; and heralds a new era for the drainage market.