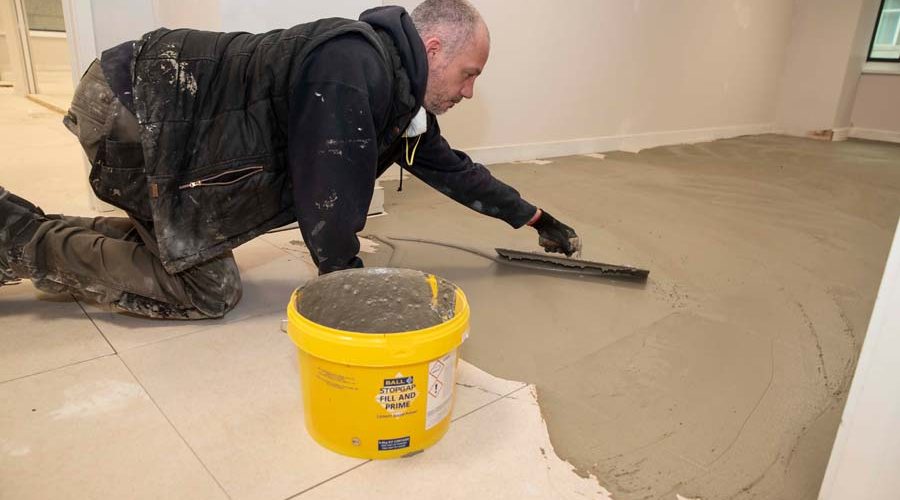 Products from F. Ball and Co. Ltd. have helped to create a professional flooring finish over both wood and metal raised access panels as part of a refurbishment to create new office space for a government service in Liverpool.

Contractors from HB Flooring, based in Sutton Coldfield, used F. Ball’s dual-purpose Stopgap Fill and Prime and Stopgap 1200 Pro smoothing underlayment to prepare subfloors before installing a combination of Luxury Vinyl Tiles (LVTs) and carpet tiles over one floor of the building, totalling 2,500m².

It was first necessary to prime the wooden raised access panels, in the office’s entranceway and walkways, where the LVTs would be installed, and fill joints between panels. Contractors therefore applied F. Ball’s Stopgap Fill and Prime over 400m² of the total floor area: all of the wooden raised access panels and a small section of the metal flooring.

Stopgap Fill and Prime is a cement-based primer with a thixotropic consistency, meaning it flows freely but sets to a gel-like consistency on standing, enabling the joints at panels to remain filled and preventing depressions resulting from a subsequently-applied levelling compound or smoothing underlayments sinking into them while setting.

Once the primer had cured, F. Ball’s Stopgap 1200 Pro smoothing underlayment was applied to create a perfectly smooth base for the installation of the LVTs. Stopgap 1200 Pro is a two-component smoothing underlayment for preparing sound internal subfloors that is suitable for use over old adhesive residues (including bitumen and carpet tile tackifiers). It’s also fast drying and fast setting, allowing floorcoverings to be installed in as little as four hours after application.

F. Ball’s Styccobond F41 carpet tile tackifier was then used to install carpet tiles directly over the metal raised access flooring. The adhesive dries to a permanently tacky film, allowing carpet tiles, installed directly over the metal raised access panels, to be removed easily should they need to be lifted to access the area beneath the panels or replaced if they become worn or damaged. Contractors from HB Flooring installed LVTs over the remaining flooring areas, comprising wooden raised access panels, which had previously been prepared using Stopgap Fill & Prime and Stopgap 1200 Pro.

Commenting on the project, Chris Helliwell, director at HB Flooring, said: “We used Stopgap Fill and Prime on the recommendation of our F. Ball technical representative to overcome the need to overboard the raised access flooring with plywood, which would have been very time consuming. We’d never used it before, but it did exactly what we needed it to do. This allowed us to hand over the project on time, despite delays getting on site.”