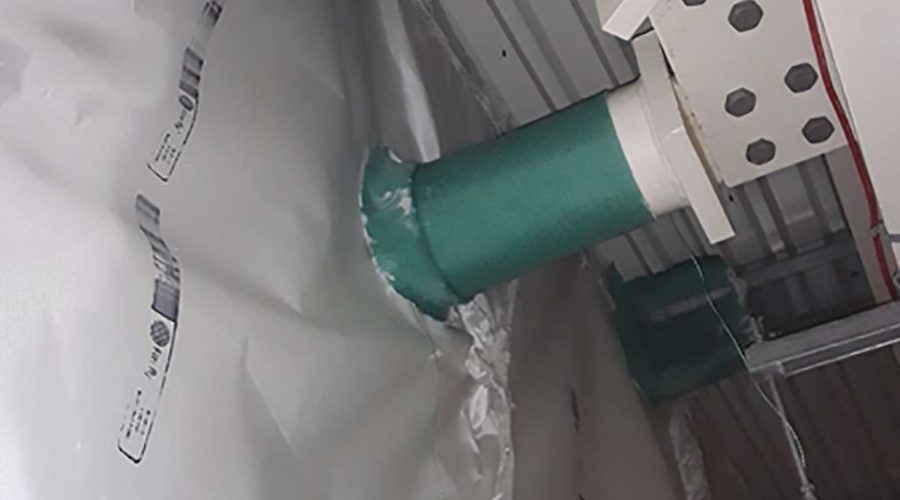 The building is being converted to serve as high bay storage facility to support the organisation’s existing distribution facility elsewhere in West Lothian and is, for the first time, making use of products from the range of TBA Firefly, including APOLLO 30/30 membrane to create new fire barriers together with TBA’s expert advice and installer training.

The Stirling based FES Group is a multi-disciplinary building services and FM specialist active across all the sectors, including contracts for the Armed Forces, healthcare, energy management and many landmark projects such as The Events Centre Aberdeen (TECA). Its own fire-stopping division carried out the installation of the APOLLO 30/30 fire barriers as part of a far-reaching update of the property’s mechanical and electrical services, on behalf of the owner who will also operate the storage facility.

The Operations Manager for FES Group, Gerry McCafferty, commented: “As a group we try wherever feasible to keep demanding specialist work in-house, which is why we established a fire-stopping division in recent years, though we had never used the TBA Firefly range prior to this project.

Having discovered that the existing barriers in the roof, which were over 20 years old and had been compromised in a number of places by other contractors carrying out alteration work, we approached TBA for advice. As unfortunately they could not be repaired and also required changes to meet the latest fire safety standards, following discussions with our client, the decision was taken to install new barriers utilising the APOLLO 30/30 because it is so lightweight and straightforward to install.

“In construction work generally it is the labour element which presents the financial ‘risk’, so if we can identify a solution and create a relationship with the manufacturer that enables us to achieve certainty over a reduced labour involvement, while delivering a fully certified outcome, that’s a logical decision for us and the Firefly products are definitely working for us.”

The APOLLO Lite 30/30 has been developed for use in vertical separation or compartmentation situations, offering 30 minutes’ integrity and insulation thereby exceeding the minimum requirements of the Building Regulations. It is widely specified to form compartments within roof voids and floor voids in many different property types, including tower blocks and other HMOs.

The non-rigid woven material is easy to cut and fix and is chemically treated to improve its cooling properties and therefore prevent temperatures rising in adjoining areas. The system has been fully tested to BS 476 Parts 6.7, 20 & 22 and is third party certified by IFCC. The six metre long rolls of APOLLO Lite 30:30 have a minimum thickness of 6mm and are installed using special staples as well as heat resistant adhesive.

In the case of the West Lothian storage facility, stockist Belgrade supplied FES’s highly trained, BM-Trada accredited fire-stopping team with 80 rolls of APOLLO to create a series of new fire breaks, sub-dividing the roof-space above the first floor office accommodation. One, for example formed a 21 metre long, 3.5 metre high curtain, with TBA’s high temperature adhesive and special staples being used to hold the material in place and to seal joints. Lengths of the manufacturer’s Collaroll were also used to wrap and protect penetrations like cable containment, pipework and purlins.

Gerry McCafferty concluded: “Our fire-stoppers are finding the TBA systems less cumbersome and easier to fit than the mineral wool products we were using previously – for instance only requiring sealing from one side, not both. We’ve had good support from the technical department and the Sales Director, Martyn Rolfe, with the specification and design. Not only is the client now considering carrying out similar upgrades to its other facilities across the country, but as Scotland’s largest installer of mechanical and electrical services, we expect to be using Firefly again on many more projects.”