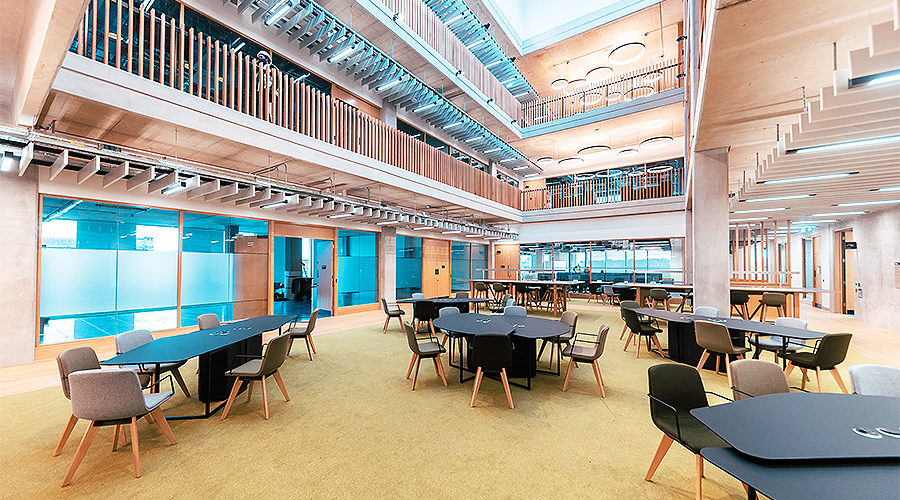 Exposed visual concrete was at the centre of the architectural vision for a state-of-the-art £46.5m, 12,000m2 learning facility on The University of Birmingham’s campus in Edgbaston. 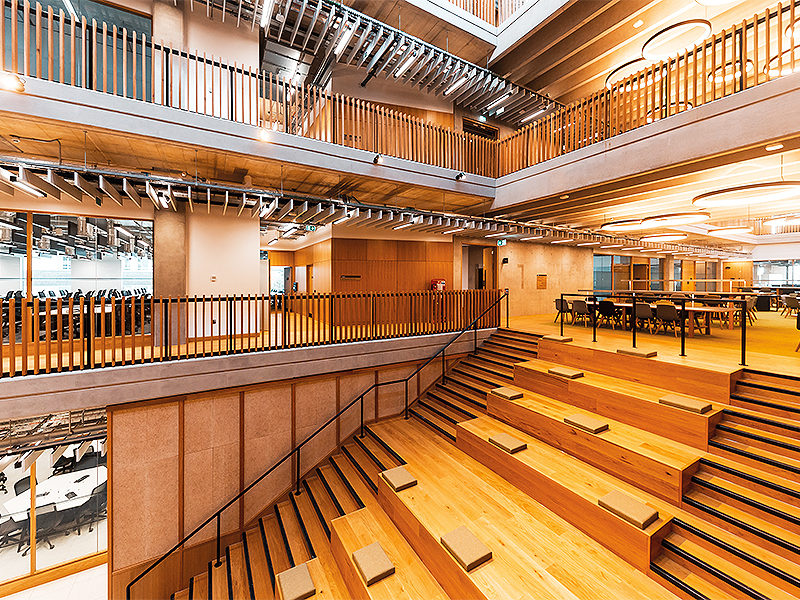 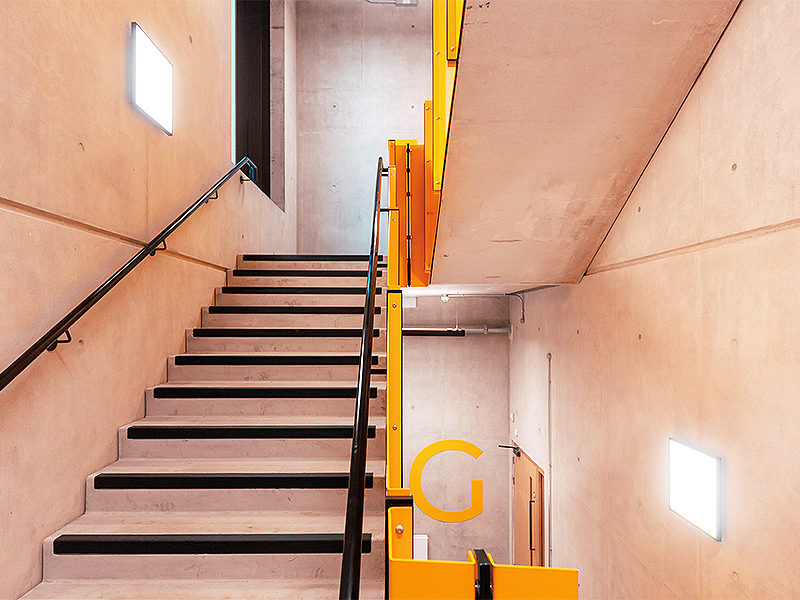 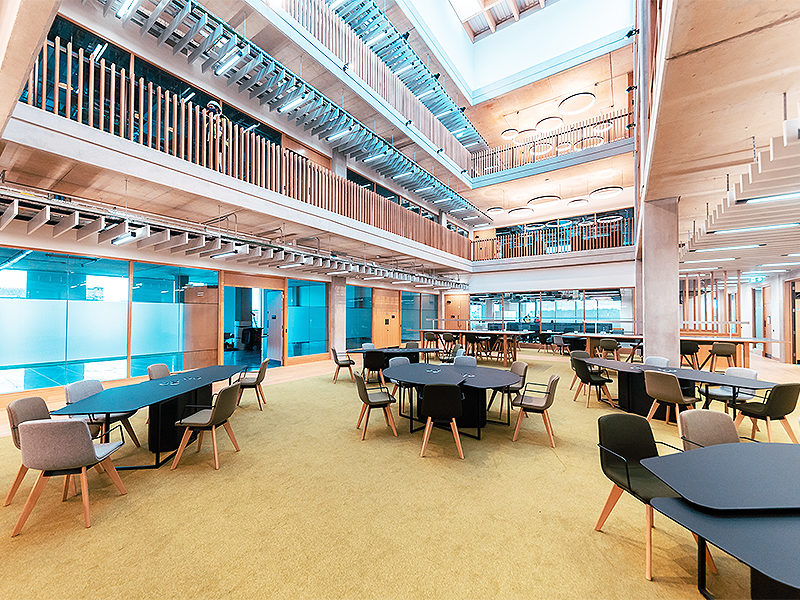 BETOcare UK was first approached by Willmott Dixon in relation to its project at The University of Birmingham in July 2019 when a concrete sub-contractor had struggled to deliver the required standard of finish on an early part of the project; a concrete stair core in the basement.

Delays affecting the vehicles transporting the concrete to site, as well as poor compaction, caused a cold join to form within the core, which created a sub-standard aesthetic finish on the £50,000 section.

Understandably, it was a cause for concern among all those involved, not least Jack Brooker, Senior Building Manager at Willmott Dixon, who oversaw all of the exposed concrete features across the project. He explains: “Exposed visual concrete was a crucial part of the overall architectural vision, centred around a four-storey atrium at the heart of the building, and there were extremely high specification requirements for the concrete finishes throughout.

“One of the key aims, and part of the educational vision, was to expose the building’s frame in as many areas as possible – columns, beams, atrium, stairs, bridge sections as well as specialist features – so it was critical that the look of the concrete was excellent. I think it’s fair to say that this was not the start that anyone had hoped for, particularly given that the building was set to be the home of some of the UK’s leading engineering research talent for many years to come.”

Various options were considered to rectify the problem, and given the high standard of finish required, the drastic step of demolishing and re-casting the entire section – over 400m2 of concrete in total – was one considered.

However, whilst this solution offered the possibility of improving on the finish during the second attempt, it presented the issue of significant delays at the very start of a 12-month project, not to mention the major environmental consequences of doing so.

As a result, Willmott Dixon decided to further explore some less common and more innovative alternatives to resolve the issue, and it was as a result of this work that BETOcare UK was consulted.

BETOcare UK Director, James Lewis, says: “When we first visited the site, there was, understandably, considerable concern. The finish of the section was poor and there was a very visible undulating line all along one concrete section. However, such issues are common problems, and I immediately knew it was one that we could easily remedy.”

The initial consultation was followed by the BETOcare UK team undertaking a small test sample in situ to demonstrate what could be achieved, a process which took two days. No fewer than five Clerks of Work from the university reviewed the test sample, and together with the Willmott Dixon team, it was agreed that the BETOcare solution was the best way to resolve the issue.

Jack Brooker adds: “There was an immediate sense of relief amongst the team. We’d found a solution that our client was not only happy, but delighted, with, but the BETOcare approach meant that we had negated the need to knock down a perfectly structurally-sound core. The environmental – as well as financial costs, delays and associated impacts – of doing so would have been significant.”

Sustainability is very much at the core of Willmott Dixon’s approach as a business (it has been a net-zero/carbon-neutral business since 2012) and has committed to all of its new buildings and major refurbishments being net-zero operational carbon by 2030.

Once the BETOcare approach had been agreed, it was then a case of waiting until the later stages of the project when the building was watertight to bring the BETOcare UK team in to work its magic. This also meant that all of the project’s visual concrete work could be assessed and any additional issues included in BETOcare’s corrective work, if needed. In the summer of 2020, work commenced on site.

The BETOcare approach enables the full range of common concrete imperfections to be corrected, from water damage and staining, to cold joints and faults, as well as post-construction damage or errors such as misplaced bolt holes. In addition to the original problem section of the basement core cold join, BETOcare addressed many of these common issues as part of its work on the project.

BETOcare UK’s work on the project focused on using lime-based fillers and specialist colour-matching techniques combined with specialist craftsmanship and expertise. The approach was pioneered in Germany approximately 15 years ago and BETOcare UK is the only company to be licensed to use the approach and products in the UK, also undertaking work internationally.

Its growing reputation has led to its implementation in an increasing number of high-profile projects including Tate St Ives, award-winning Faylands House and the Investcorp Building at St Anthony’s College at The University of Oxford.

Jack Brooker says: “The work with the BETOcare team was very collaborative and they were great to work with at a time when there was a lot of pressure to stick to schedule. For example, we had a very tight window to get the concrete work completed in the main atrium before the underfloor heating was installed, and only a few days’ use of the spider cherry picker required to enable the work. If there had been delays in BETOcare finishing the work, it would have had a significant knock-on effect.

“There is a real art to the work they undertake, and they were extremely adept, producing a very high-quality finish, but also knowing when to stop, which is vital as concrete finishes tend to be a very subjective area.”

“Overall, I would say that we saved a six-figure sum by using BETOcare to resolve the visual concrete issues we had, and that doesn’t include the financial costs that would have been associated with the considerable delays we would have seen with other, more traditional resolutions to the problem,” says Jack.

But, perhaps most important of all, for a company that prides itself on the longevity of its relationships with clients, Willmott Dixon was also very keen that the completed work met the client’s expectations. Jack concludes: “The finish of BETOcare’s work was outstanding, but, ultimately, as with any project, it is the client that decides what is and isn’t acceptable, and the university’s project manager was closely involved during every stage. He was very fair and reasonable, but his standards were high, and we knew that both the finish and the integrity of the work had to be high. Thankfully, he was delighted.”