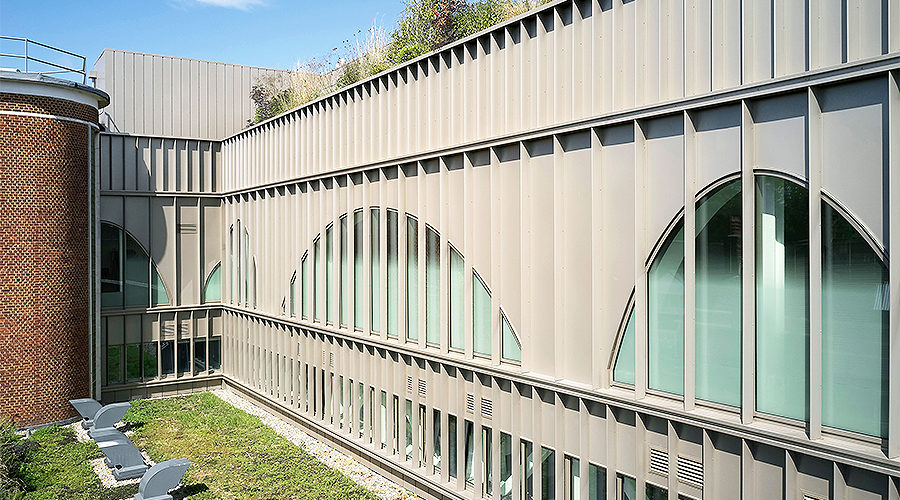 De Matos Ryan has completed the first phase of the redevelopment and masterplanning of ArtsEd performing arts school in Chiswick, London. Located in a tight and landlocked block within a largely suburban site, the complex redevelopment of ArtsEd’s Cone Ripman House reorganises a previously-disparate and physically-separated educational campus into one cohesive whole. 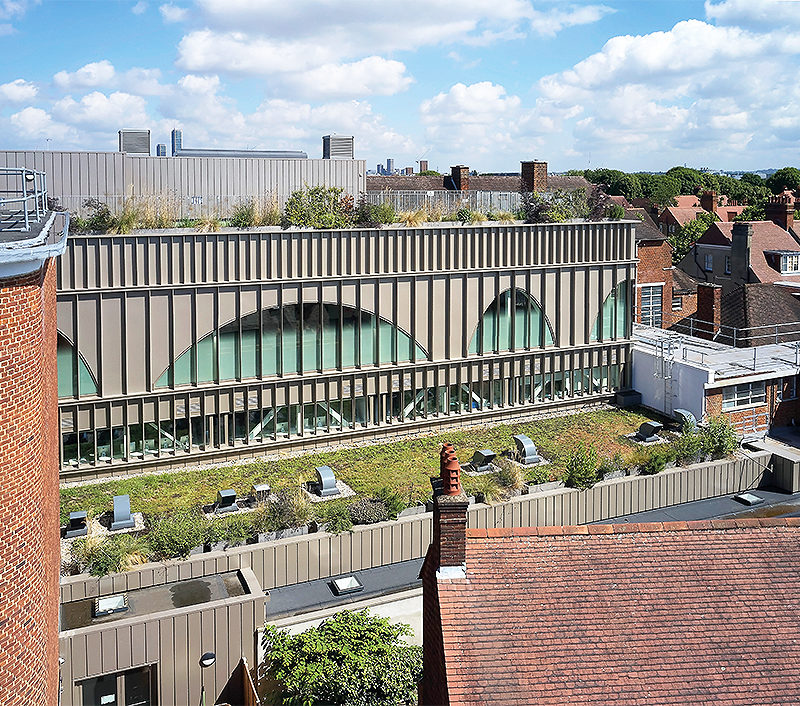 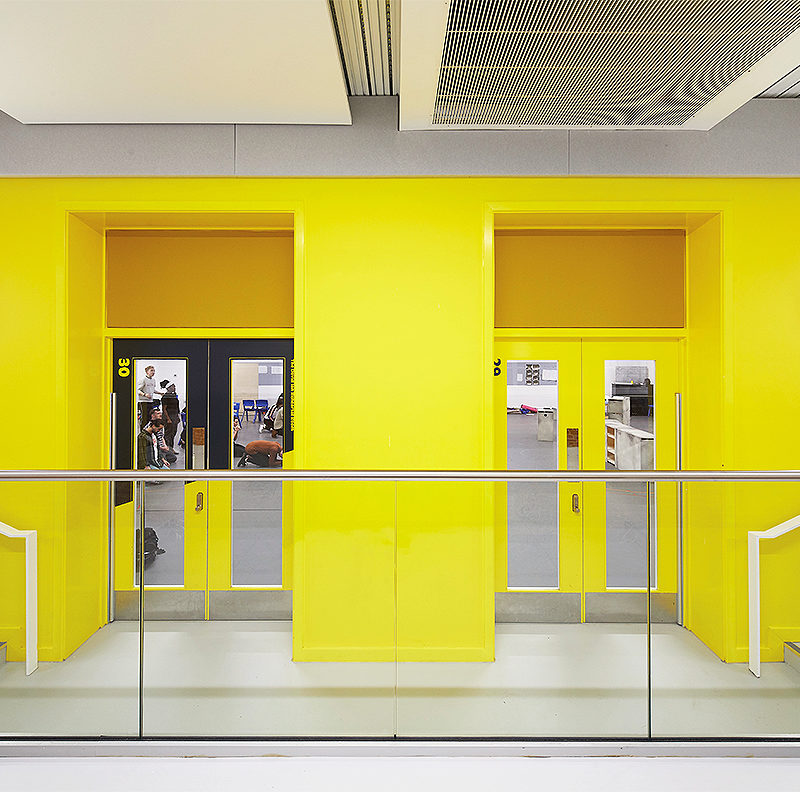 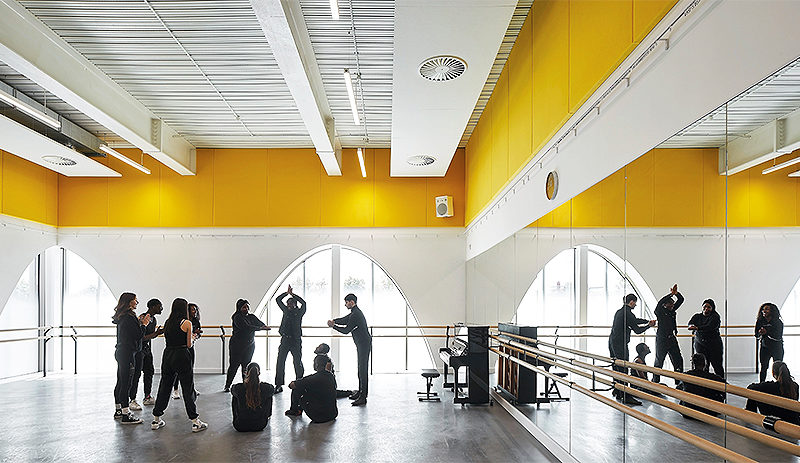 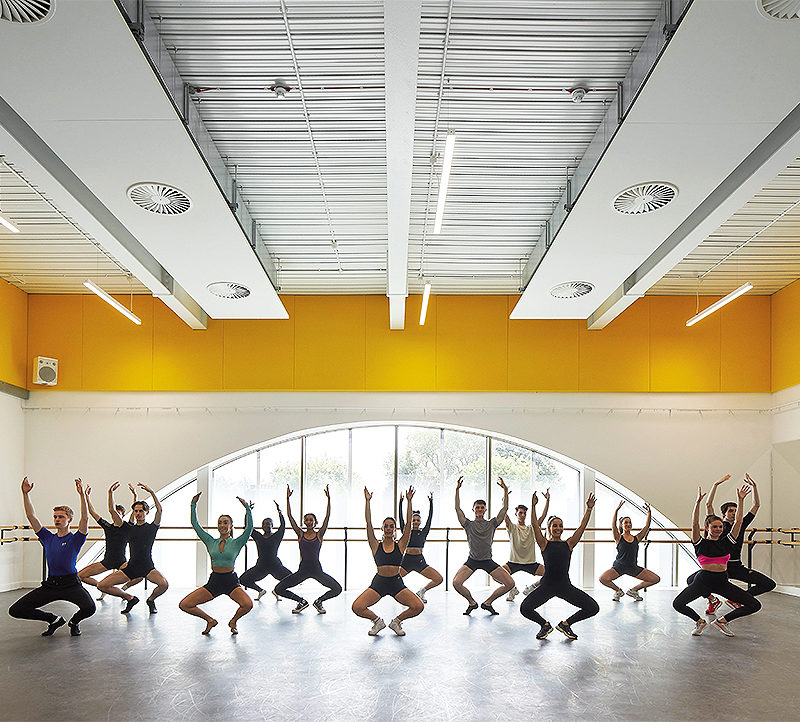 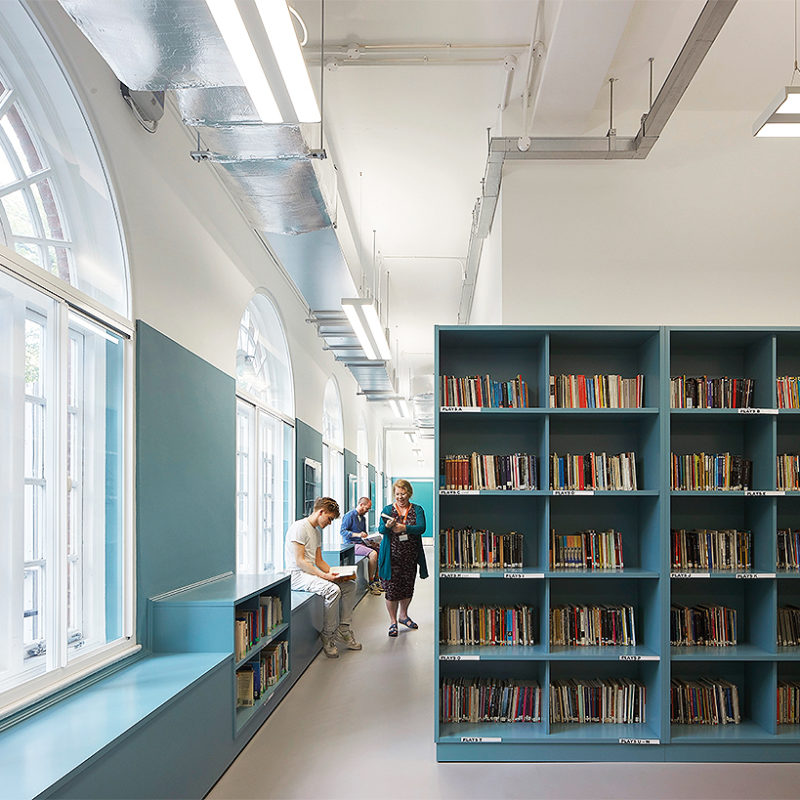 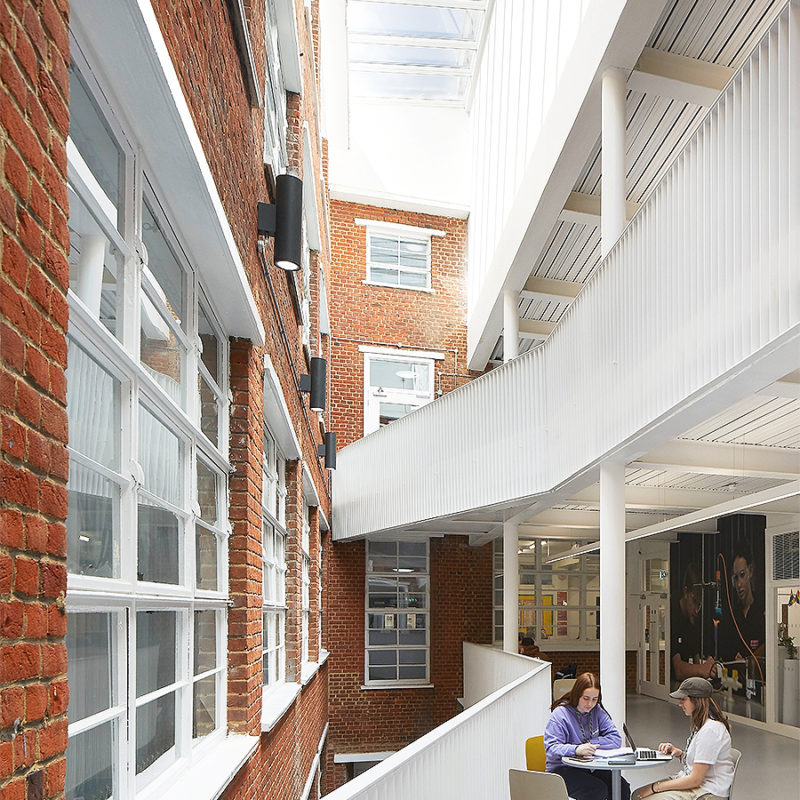 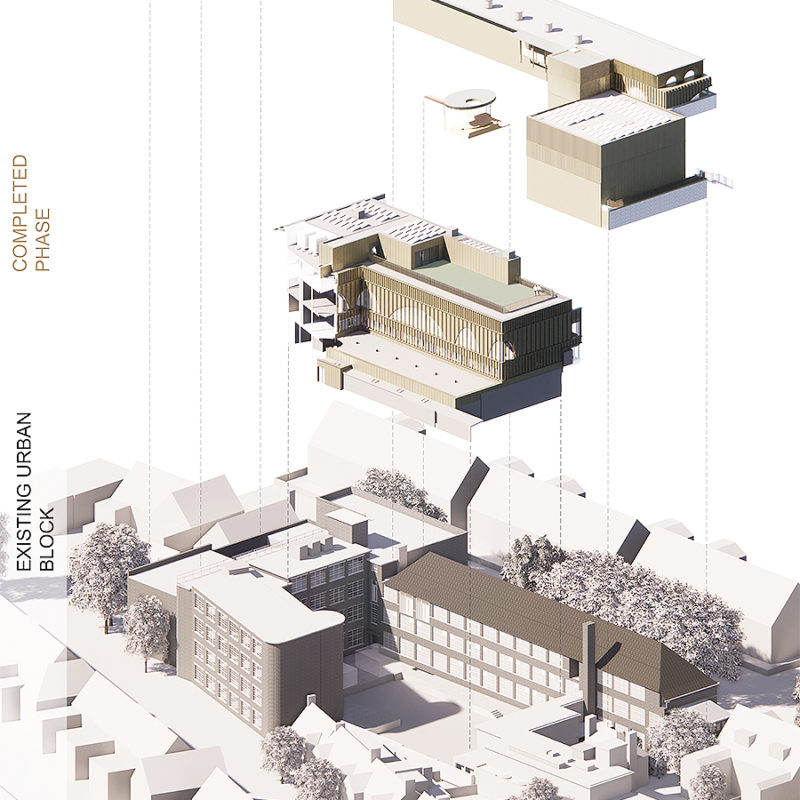 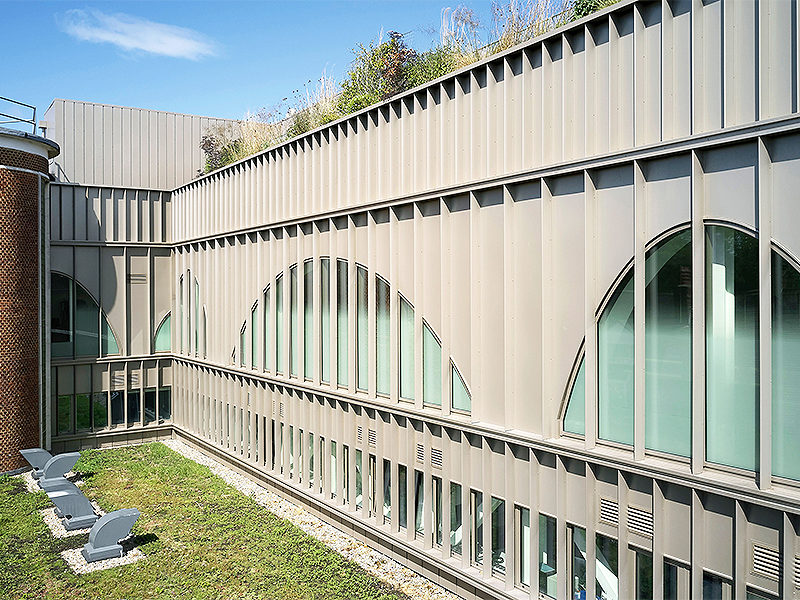 The project will be delivered in three phases over the next decade to minimise disruption to the everyday running of the school and adjoining properties. De Matos Ryan Director, Jose Esteves De Matos, says: “With space in London limited and at a premium, the masterplanning of this project within its existing footprint unlocks the site’s potential and creates much-needed new studio, rehearsal and teaching spaces in the previously-unused courtyard and rooftop areas.

“Our scheme maximises every millimetre of space available to ensure that ArtsEd’s four distinct schools can now all operate from their own state-of-the-art site. The school’s facilities will now match the exceptional quality of teaching to ensure that future generations continue to leave ArtsEd as outstandingly confident and creative young performers.”

Established nearly 100 years ago, ArtsEd was founded by ground-breaking educational pioneers who believed passionately in the value of combining a general academic education with a specialised training in dance, drama, music and art. Originally purpose built for Chiswick Polytechnic in the 1950s, the existing building was in desperate need of extension and refurbishment. The site was unable to accommodate all its students nor provide them with the physical and environmental quality of facilities that they deserve and that its teaching requires.

Travelling between sites gave rise to safeguarding concerns and there was previously no outside recreational space for its day-school students. Restructuring and clearly defining safeguarding separation has helped to consolidate all the students and staff and secure ArtsEd’s position as a world-leading provider of musical theatre, dance and drama education for students from age 11 through to graduate level.

The redevelopment will rejuvenate and revitalise the existing site, dramatically improve existing provisions and create much-needed additional spaces. The new and existing spaces are now environmentally comfortable, sustainable and support the overall wellbeing of its occupants physically, socially and creatively.

In addition to its educational programmes, ArtsEd has a strong community outreach and provision programme that draws in a wide array of the local community to share the school’s facilities and expert staff. The school initially looked at various development options, including relocation and new-build development, but settled on remaining and maintaining its close local ties.

The masterplan aims to enhance the existing cultural asset by modernising its facilities and securing its future financial viability and long-term use. De Matos Ryan has carefully considered the development proposals to ensure that they positively contribute to the school’s immediate neighbours, the wider conservation area and the community. The proposed development and refurbishment directly addresses the school’s core objectives whilst ensuring that ArtsEd continues to support the wider community.

The scheme’s design and ethos reflects the pioneering vision of Olive Ripman and Grace Cone who founded the school in 1944. The playful architectural narrative is inspired by the ideas of ‘natural movement’ and the concept of transformational education through the medium of dance. Underpinned by a new, state-of-the-art studio theatre at the eastern end of the site, the scheme unlocks the potential of the existing buildings whilst delivering an additional 2875m2 (GIA) of new facilities. The old gymnasium, which took up a third of the existing courtyard space, has been demolished to facilitate the new spaces.

With economic and environmental sustainability in mind, careful consideration has been given to the new building proposals which minimise alterations to the existing building and maximise the potential of those spaces through localised interventions. Reduced energy loss, energy use and operational costs with a new sustainable services strategy was implemented to improve wellbeing. Phase one has included creating a triple-layer volume set against the existing building that houses a series of shared rooms and breakout spaces connecting the old and new buildings, new classrooms and three 6m-high square dance studios with improved height requirements and sprung floors to prevent injuries.

The exterior treatment of the new extensions uses an architectural language that brings renewed coherence and identity to the school. The facade uses economic industrial envelope material in a bespoke and playful manner to elevate its materiality. The new design cloaks as much of the existing thin and leaky facade as possible in order to increase the building’s overall thermal performance. The specification of the new envelope exceeds the existing regulations to target for future higher standards.

The facade’s concept is reminiscent of the loops and arcs in musical notation and movement. Varying and dynamic arched openings are set within and against the simple, repetitive rhythm of the profiled anodized aluminium facade to reflect the dynamic activity housed within the school. The large openings provide clear and expansive views of the London skyline from within and open out onto a planted roof terrace and recreational area.

As part of the brief for the masterplan, a new circulation spine along the rear elevation of the main building has allowed the school to become fully accessible. Improved acoustic treatment, ventilation and heating design has been incorporated to minimise energy consumption and the impact of the noisy road on the school as well as the impact of the dance and acting studio noise on neighbouring properties. The existing practice rooms were poorly lit and ventilated with moisture visibly running down their walls. A hybrid natural ventilation strategy has been applied to meet the mix of ventilation demands. Rooftop turrets serve the new circulation spine between the old and new spaces to maximise the impact of newly-installed plants. Rainwater runoff is controlled by using several approaches; a 200m2 blue roof collection zone that can hold 150mm-deep water, a sedum-planted roof area and below-ground attenuation crates in the front hard landscaping areas.

Careful phasing has eased funding and delivery pressures. Future phases will provide a new adaptable studio theatre, a voice teaching suite and a series of rooftop studios. The proposed new studio theatre, pivotally located at the heart of the block, will adapt to numerous actor-audience typologies, offering unexpected opportunities for creative teams to experiment wider and discover more innovative creative landscapes. The volumetric identity of the studio theatre will remain present at all levels. It will be accessed by a shared social foyer that houses a cafeteria and links to the reception area as well as the main auditorium. A figurative arched entrance canopy and reorganised staff car park will provide enhanced identity and a streetscape that visually connects to the new rooftop volume housing state-of-the-art north-lit dance studios.

Previous Post Making Lighting Circularity Work
Next Post Is Your Lift Ready for the Analogue to Digital Switchover?