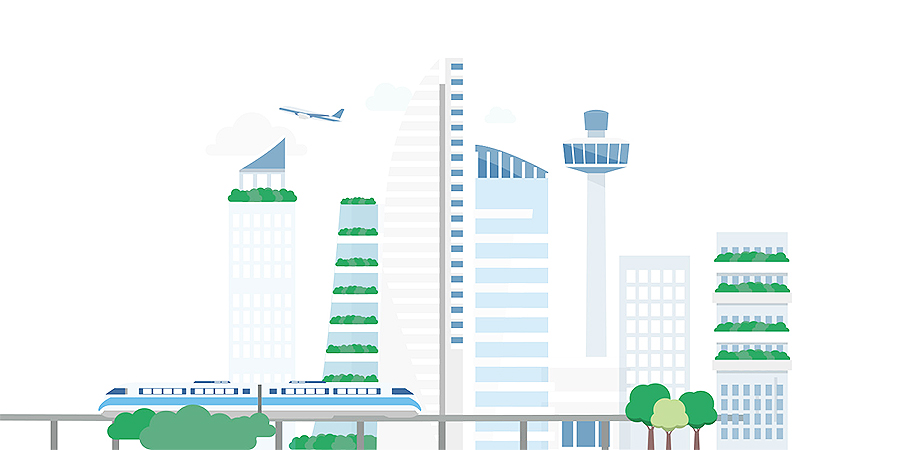 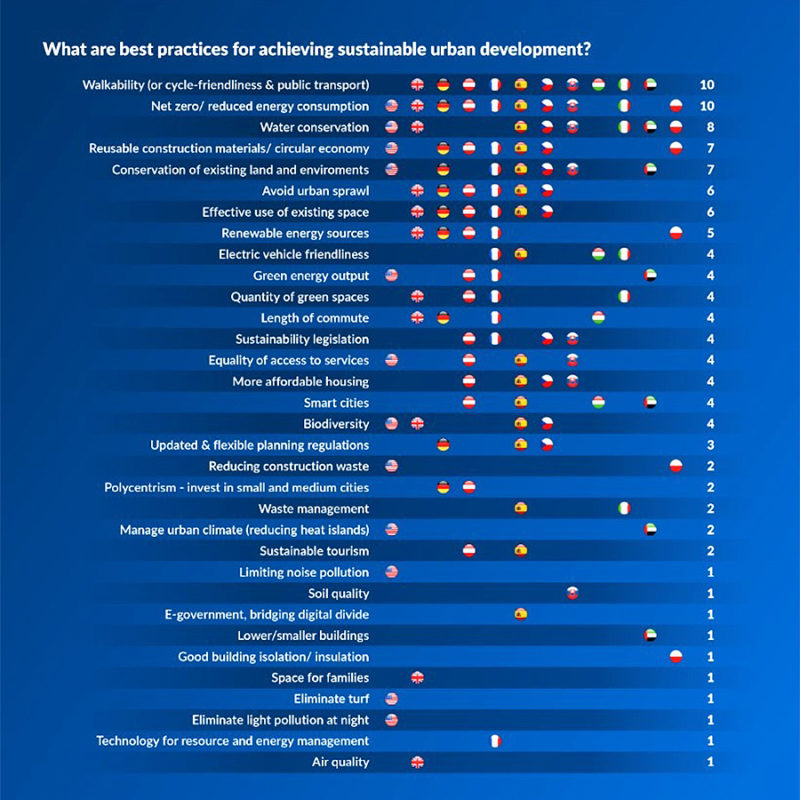 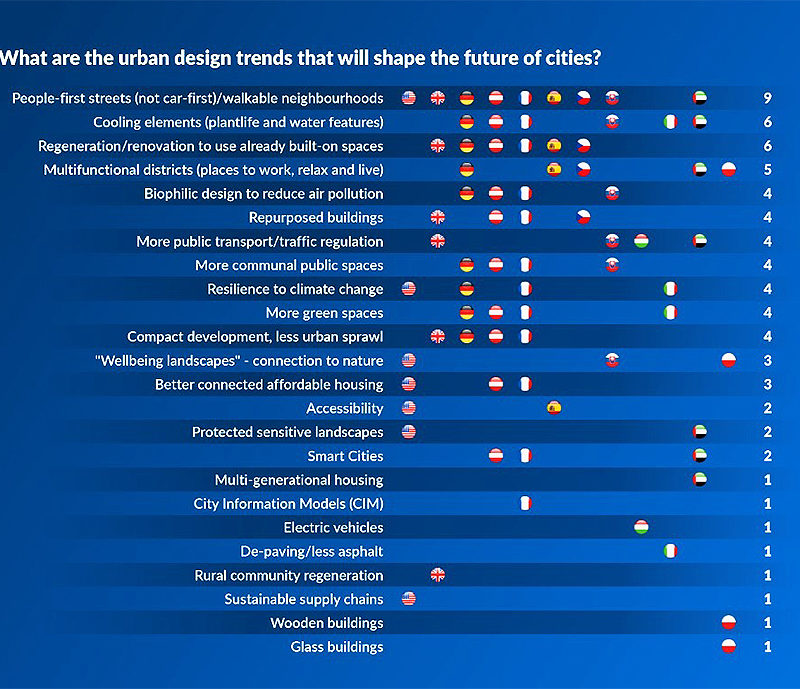 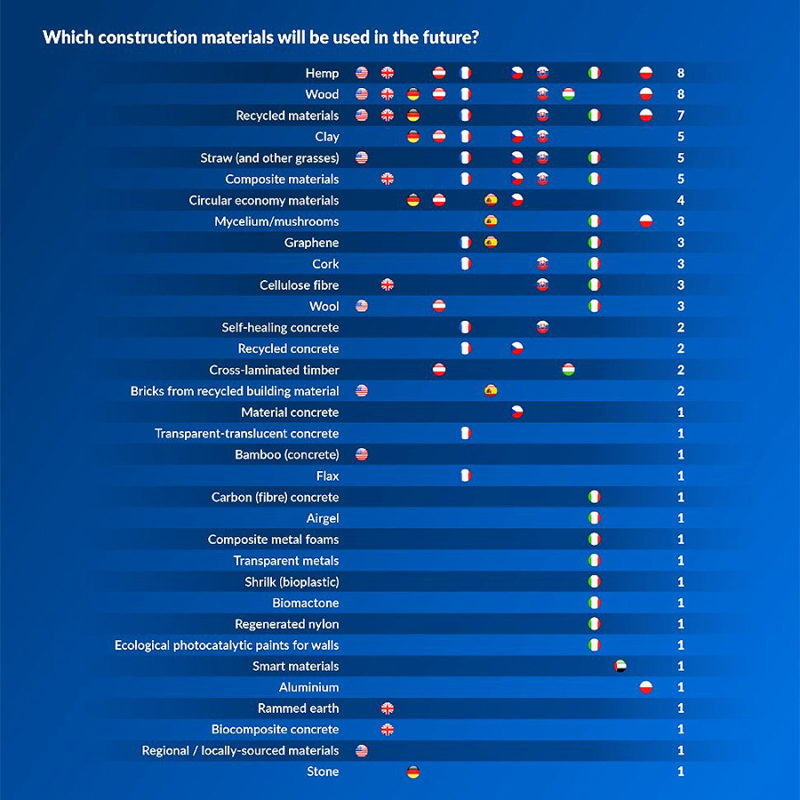 •  UK’s climate emergency response focused on ‘renovation’, ‘retrofit’ and “walkable neighbourhoods”, but lags behind other countries in carbon-reduction terms

•  Increasing use of renewable ‘biomaterials’, with 66% of countries covered regarding hemp as a ‘future building material’

PlanRadar, a leading digital construction, real estate and facilities management platform, publishes a new report on emerging trends set to dominate the global specification community: The Architecture of the Future.

The first in a series of specially-produced architecture and construction reports, this important analysis of evolving preferences draws data from 12 countries worldwide*[1]. It provides a contemporary snapshot of international sustainable efforts and approaches as Net Zero 2050 draws closer.

The key takeaway is that climate change is now regarded as the sector’s greatest challenge. The report highlights that the majority of specifiers are now committed to creating “climate-proof” buildings, capable of withstanding increasing weather extremes, such as heat and flooding.

Taking a deeper diver into the research, highlights from The Architecture of the Future report include:

A primary focus on ‘sustainability’ was consistent across all territories, but the study also highlighted international correlations and nuances, particularly best practice.

This was closely followed by 50% of territories highlighting the importance of ‘natural cooling’ through trees, plant life and water features, ‘green retrofitting’, and ‘mixed-use developments’.

On a granular level, whilst intention appears strong, it’s not necessarily converting into tangible activity. In fact, the UK appeared to lag behind the low carbon construction curve when compared with the other 11 countries analysed. Notably, despite increasing steps to legislate and improve upon Net Zero 2050 targets, the UK is not working at the pace required to meet its goals.

This reflects findings in recent NBS research, the Sustainable Futures Report, which found, disappointingly, over half of construction professionals had failed to work on a single net-zero project in the last twelve months. It’s a situation which needs to change if the UK is to stay on track with official targets.

The Architecture of the Future also highlighted the green design trends shaping the future of international urban construction.

For example, Poland and Hungary are looking to increase the amount of high-performance insulation in urban developments to combat more extreme climatic fluctuations and increase energy efficiency. In the UAE, where searing temperatures already affect daily life, specifying more low-rise, smaller buildings to prevent heat islands within densely populated areas was seen as a crucial consideration.

For UK, where cities are not traditionally built for modern transport face increasing traffic, congestion and pollution, specifiers want to reduce the country’s reliance on cars and vehicles. Furthermore, with an increasing focus on environmental conservation and rural regeneration, to improve levels of retrofitting and building on brownfield sites was also regarded as a priority.

Supply chains are also under the microscope, particularly the US, where green policy is inconsistent between states leading to standardising logistical sustainability considered as a top priority.

Invention and innovation is reshaping our approach to construction, and The Architecture of the Future report highlights a paradigm shift towards greener building products to tackle the climate change conundrum.

Particularly, the increasing use of ‘biomaterials’ is set to rewrite the international specification rulebook over the next decade. With the ability to absorb carbon dioxide during growth and then ‘store’ it, they possess highly-sustainable properties that will help lower construction-created CO2. Proving this growth in biomaterials interest, 75% of countries such expect a rise in the use of hemp. Others are turning to straw and grasses, whilst some expect mycelium (fungi) will play a big role.

Looking at territory specifics, in Italy, a growing preference for graphene-based ecological paints, which coverts atmospheric pollutants into harmless nitrates and other new materials, such as regenerated nylon and carbon fibre concrete, are helping to drive down harmful emissions in urban areas.

Hungary was the only territory to identify wood and CLT as ‘new’ materials, whilst the UAE expressed a particular interest in ‘smart materials’ including ‘shape memory polymers’, which are able to return to their original form once light or heat has been applied. In turn, France identified transparent and translucent concrete whilst the UK specified bio-composite concrete and rammed earth.

It all highlights how the global specification community is racing towards the lowest carbon construction materials possible, as Net Zero 2050 draws closer and tighter supranational low-carbon regulations are introduced.

Commenting on the Architecture of the Future Report, Ibrahim Imam, Co-founder and Co-CEO of PlanRadar said: “It’s clear our changing weather patterns are having an impact on how we build. Whether it’s extreme heat, wildfire, floods or rising sea levels, it’s now vital that our buildings become more resilient. It’s through wider research from other nations that we can better understand the challenges of climate change and tackle it unilaterally.”

Co-founder and Co-CEO, Sander Van de Rijdt adds, “In the UK, where temperatures reached record highs in summer 2022, increasing building resilience against climate change is set to become a key focus for build environment professionals. Proof of this can be found in new regulation, such as Part L, which are set to make climate futureproofing a requirement, not just a nice-to-have. Ultimately, Combating climate change is not just about counteracting the issues of today but also those of tomorrow, working unilaterally is the only way we’re going to be successful.”

For more insights, read PlanRadar’s ‘Architecture of the Future’ eBook report in full at the website below.

[1] The US, UK, Germany, Austria, France, Spain, Italy, Slovakia, Czechia, Hungary, Poland and the UAE were the countries included in the study

Find out more at PlanRadar